How did I move from Chicago to somewhere even colder? Apparently there were signs of first snow in Boston a few hours ago, ekk! After the freezing morning run along Charles River, I’ve strategically planned to stay at a coffee shop all day. It’s nice and toasty in here, so I had to double-check….first snow on Oct 18?

Only three weeks ago, I was still in Chicago waiting to try my first Trapeze class in nice, warmish weather. Trapeze, for those unfamiliar, is where you hold onto a horizontal bar (think monkey bar) and swing in the air, just like Cirque du Soleil. Terrified by the idea? I was too! Convinced that I wouldn’t be able to hold onto the bar and embarrassingly fall off in a split second, I walked up to write my name on the chalkboard and hear the instructions for first timers.

The basic instruction is to hold on tight to the bar and then follow the rest of the instructions being called out to you when you’re on the bar. READY? um….not really….?

Ignoring my shaking legs, up I climbed on the thin ladder, which was wobbling in the Lake Michigan breeze. Here’s a video of what I could do by the end of class:

I think I’m ready to audition for Cirque! Okay, maybe not, but it wasn’t as terrifying as I thought it would be. I know you skeptics out there will not believe me when I say that. The truth is all the movements relied on momentum, especially when I had to put my leg up onto the bar, it was much easier than it looked because it used the force you get when you jump off the board. In fact, the hardest part was probably getting your legs off the board, which took me an entire minute, along with ample convincing from the instructor, the first time around (the video became too long to upload…) Otherwise, it’s not bad!

I would definitely encourage you to try if you’re even slightly intrigued. Full disclosure – my muscles did hurt for about 2 weeks after because it used muscles that I never knew I had (possibly similar to the ones used in yoga?) Great experience and great crew! 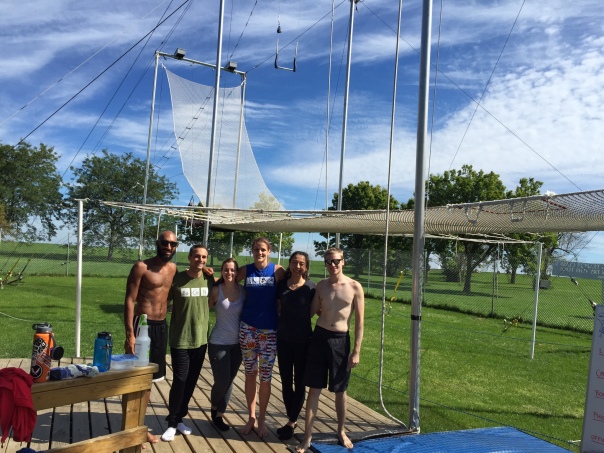 For those of you who might want to give it a try, they have rigs in Chicago, NYC, Boston, DC, LA. Check it out at TSNY.